… because who doesn’t love a good Venn Diagram?

CAA is committed to focusing on just one issue, and we avoid taking stances on other issues. Sometimes people question why, and I often see calls among the greater animal rights/social justice world for a multi-issue movement.

But I think the most serious problem is simply recruiting volunteers. I’ve illustrated that problem with this handy Venn Diagram. 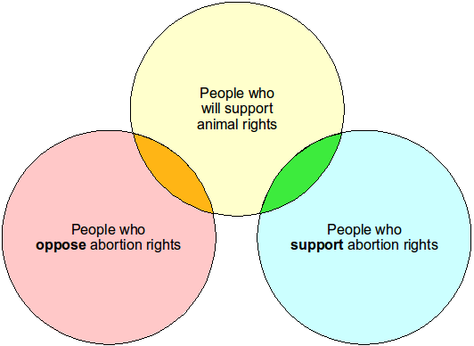 Now, some people might dispute the relatively small size of each intersection. That’s not the point (and I mostly did it so the text stayed readable). The real key is that the two intersections are mutually exclusive. Our hypothetical multi-issue group can only pick one of those two intersections.

I consider this to be entirely proved by this blog entry, because it includes math. And math is always right.