I feel that Perl 5 activity has increased over the past few years, but is that an illusion? I brought this topic up on the #p5p IRC channel and Nicholas Clark said, “everyone assumes growth. If you look at the ‘committers’ graph on https://www.ohloh.net/p/perl/analyses/latest I don’t think there’s been any marked growth (or reduction) in the past 10 years. Just a lot of noise”.

So is he right? I wanted to figure it out.

The Ohloh chart is very noisy. It shows the number of committers per month, which seems to swing back and forth rather dramatically. I used the Ohloh API to download the raw data and run it through a spreadsheet.

Instead of looking at each month, I looked at the average number of committers per year. I started with 2001, since before that year the data is even more wildly variable. Also, I know that the farther we go back in the commit history, the more guesses were made during the import to git.

Here’s the graph I created in Gnumeric: 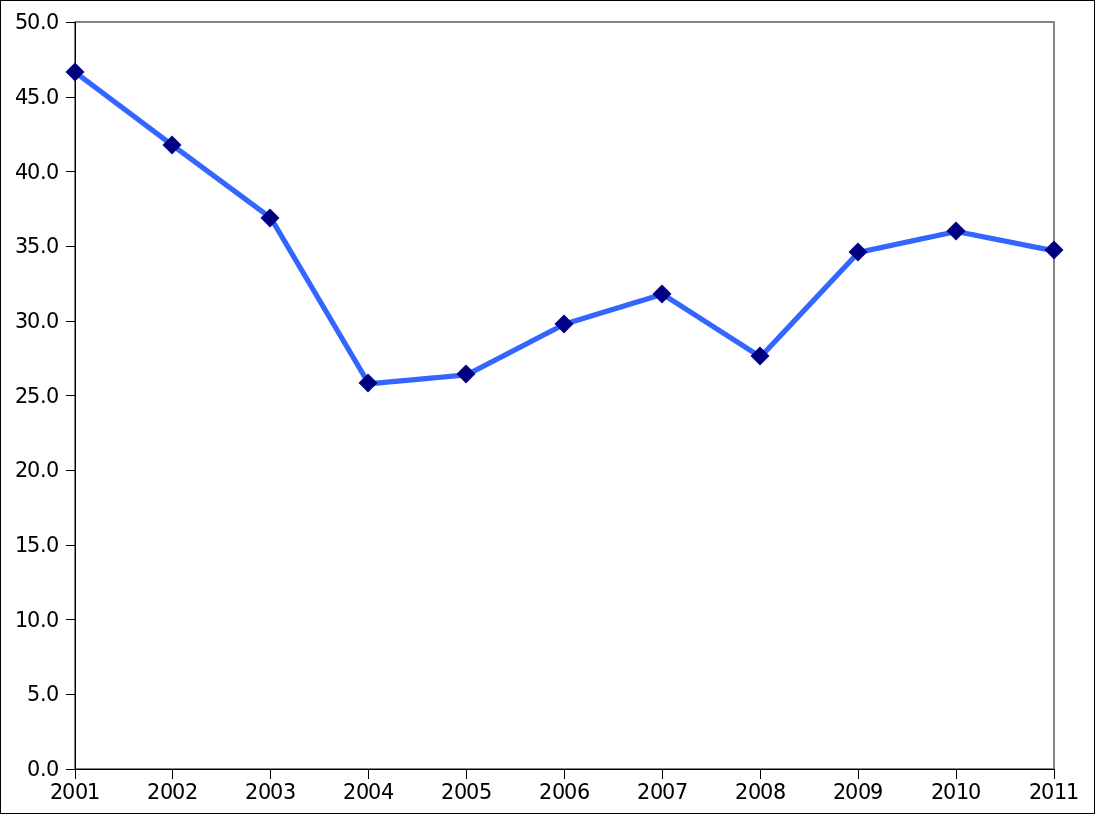 It looks like there was a big dropoff in committers from 2001 to 2004, and we’ve seen an upwards trend since then. I’m not sure there’s enough data to draw any strong conclusions. My gut feeling that activity was up in the past few years was correct, but we don’t yet know whether that’s a fluke.

We still haven’t reached our historical highs, so I think Nick was right when you look at the overall history of Perl 5. Nevertheless, I’m hopeful that we’re in the midst of a positive trend.

Christian Walde, on 2012-03-17 10:21, said:
Could you generate the graph with the impact of each committer weighted by the amount of their commits?

Someone would have to write some code to look at each git commit and record those stats. It sounds interesting, but I probably won’t do it myself.

Caleb Cushing ( xenoterracide ), on 2012-03-18 15:26, said:
I hope so, but perl really needs to do something interesting in core in the next year. The vastly improved unicode is great, and so is some of the performance improvements I’ve read about. But PHP has traits now… people need to figure out how to get things moving forward in core in ways that are more big and exciting, and potentially also reduce gobs of boilerplate. I don’t see a big splash announcement coming for 5.16, hopefully we can get one for 5.18. class, method, and role would all be things that I thing would move things forward. Maybe if we tried really hard we could slowly turn perl 5 into perl 6 (just sayin')